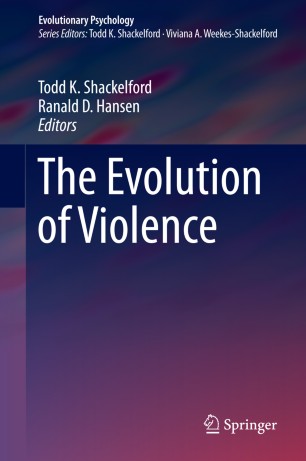 The Evolution of Violence

Our contemporary capacity for understanding and empathy suggests that people are becoming less disposed to violence. At the same time, current developments in war technologies and the popularity of blood-soaked movies and video games point to the opposite conclusion. The works of Darwin hold crucial keys to the puzzle, yet his theories--and evolutionary theory in general--are often dismissed as relics, or worse.

The Evolution of Violence explores and explodes myths about evolutionary theory while restoring Darwinian concepts to modern-day relevance. In these provocative pages, violence scholars from across the disciplines elegantly argue that evolutionary perspectives, far from conflicting with current science, complement and enhance standard social theory. Compelling original essays in areas such as domestic abuse, sibling conflict, and aggression in women make the case with clarity, and the contributors' theoretical and empirical insights carry significant practical implications for violence prevention. Among the featured topics:

Scholarly and useful for researchers and evolutionary scientists while accessible to interested laypersons, The Evolution of Violence is no simple reminder of how far we've come as a species--it points clearly to our human potential for future progress.

Ranald D. Hansen is a Professor of Psychology at Oakland University in Rochester, Michigan. He also serves as the CEO of Innovation Emporium, Inc., a company focused on knowledge management, creating sustainable industry-university partnerships, and educational environment optimization. His research in cognitive science and psychophysiology has been funded by the National Science Foundation and the National Institutes of Health. A significant portion of this work was directed toward developing a model derived from an evolutionary science perspective for integrating emotive and cognitive processes. In the past decade he has participated in creating multiple regional innovation drivers, including technology accelerators and innovation zones.

"This collection represents the scientific and intellectual richness of the contemporary understanding of violence from an evolutionary perspective, and amply demonstrates why an understanding of the biological roots of violence (and nonviolence) is indispensable to our species’ attempt to reduce it."
Steven Pinker
Buy options