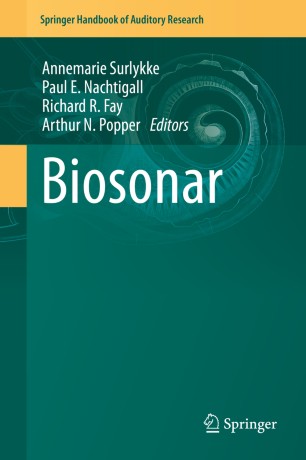 Bats and odondoctes have evolved the ability to use echolocation to find objects in their environments.  And, despite there being substantial differences in their environments, there are substantial similarities, as well as any number of fascinating differences, in how members of these two groups produce, use, and process biosonar signals.  Chapters are written by experts from on both animal groups, resulting in collaborations that examine not only data on bats and odontocetes, but also compare and contrast mechanism and what is known.  In effect, the chapters provide a unique insight that will help push forward our understanding of biosonar in both groups.

•             Hearing during echolocation in whales and bats – Paul E. Nachtigall and Gerd Schuller

•             Localization and classification of targets by echolocating bats and dolphins – James A. Simmons, Dorian Houser, and Laura Kloepper