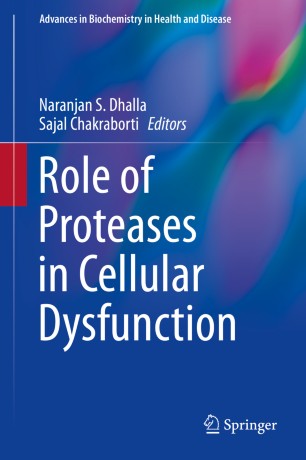 Role of Proteases in Cellular Dysfunction

Part of the Advances in Biochemistry in Health and Disease book series (ABHD, volume 8)

It is now well known that proteases are found everywhere, in viruses and bacteria as well as in all human, animal and plant cells, and play a role in a variety of biological functions ranging from digestion, fertilization, development to senescence and death. Under physiological conditions the ability of proteases is regulated by endogenous inhibitors. However, when the activity of proteases is not regulated appropriately, disease processes can result, as seen in Alzheimer’s disease, cancer metastasis and tumor progression, inflammation and atherosclerosis. Thus it is evident that there is an absolute need for a tighter control of proteolytic activities in different cells and tissues.

Aimed at graduate students and researchers with an interest in cellular proteolytic events, Role of Proteases in Cellular Dysfunctions is the second book on Proteases in this series. The book consists of three parts in specified topics based on current literatures for a better understanding for the readers with respect to their subject-wise interests. The first section of this book covers a brief idea about the neuronal disorders and the involvement of proteases such as calpains, caspases and matrix metalloproteases (MMPs). The second section covers the deadly disease cancer and its relation to ubiquitin-proteosomal system, MMPs and serine proteases. The last section is about the role of proteases such as calpains, MMPs and serine protease as well as urokinase type plasminogen activator receptor (uPAR) in causing cardiovascular defects.