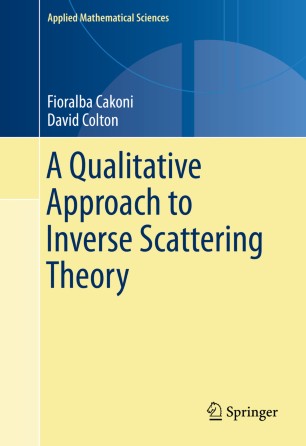 Inverse scattering theory is an important area of applied mathematics due to its central role in such areas as medical imaging , nondestructive testing and geophysical exploration. Until recently all existing algorithms for solving inverse scattering problems were based on using either a weak scattering assumption or on the use of nonlinear optimization techniques. The limitations of these methods have led in recent years to an alternative approach to the inverse scattering problem which avoids the incorrect model assumptions inherent in the use of weak scattering approximations as well as the strong a priori information needed in order to implement nonlinear optimization techniques. These new methods come under the general title of qualitative methods in inverse scattering theory and seek to determine an approximation to the shape of the scattering object as well as estimates on its material properties without making any weak scattering assumption and using essentially no a priori information on the nature of the scattering object. This book is designed to be an introduction to this new approach in inverse scattering theory focusing on the use of sampling methods and transmission eigenvalues. In order to aid the reader coming from a discipline outside of mathematics we have included background material on functional analysis, Sobolev spaces, the theory of ill posed problems and certain topics in in the theory of entire functions of a complex variable. This book is an updated and expanded version of an earlier book by the authors published by Springer titled Qualitative Methods in Inverse Scattering Theory

Review of Qualitative Methods in Inverse Scattering Theory All in all, the authors do exceptionally well in combining such a wide variety of mathematical material and in presenting it in a well-organized and easy-to-follow fashion. This text certainly complements the growing body of work in inverse scattering and should well suit both new researchers to the field as well as those who could benefit from such a nice codified collection of profitable results combined in one bound volume. SIAM Review, 2006