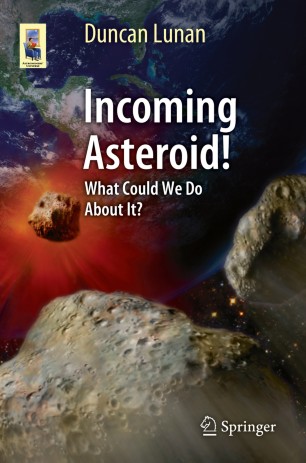 What Could We Do About It?

Lately there have been more and more news stories on objects from space – such as asteroids, comets, and meteors – whizzing past Earth. One even exploded in the atmosphere over a Russian city in 2012, causing real damage and injuries. Impacts are not uncommon in our Solar System, even on Earth, and people are beginning to realize that we must prepare for such an event here on Earth.

What if we knew there was going to be an impact in 10 years’ time? What could we do? It’s not so far in the future that we can ignore the threat, and not so soon that nothing could be done. The author and his colleagues set out to explore how they could turn aside a rock asteroid, one kilometer in diameter, within this 10-year timescale.

Having set themselves this challenge, they identified the steps that might be taken, using technologies that are currently under development or proposed. They considered an unmanned mission, a follow-up manned mission, and a range of final options, along with ways to reduce the worst consequences for humanity if the impact cannot be prevented.

With more warning, the techniques described could be adapted to deal with more severe threats. If successful, they can generate the capability for a much expanded human presence in space thereafter. With the dangers now beginning to be recognized internationally and with major new programs already in motion, the prospects for civilization and humanity, in relation to the danger of impacts, look much more hopeful than they did only a decade ago.