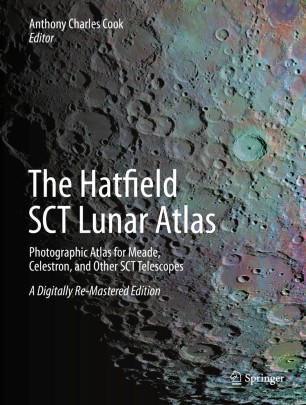 Photographic Atlas for Meade, Celestron, and Other SCT Telescopes: A Digitally Re-Mastered Edition

In a major publishing event for lunar observers, the justly famous Hatfield atlas is updated in even more usable form. This version of Hatfield’s classic atlas solves the problem of mirror images, making identification of left-right reversed imaged lunar features both quick and easy. SCT and Maksutov telescopes – which of course include the best-selling models from Meade and Celestron – reverse the visual image left to right. Thus it is extremely difficult to identify lunar features at the eyepiece of one of the instruments using a conventional Moon atlas, as the human brain does not cope well when trying to compare the real thing with a map that is a mirror image of it. Now this issue has at last been solved.

In this atlas the Moon’s surface is shown at various sun angles, and inset keys show the effects of optical librations. Smaller non-mirrored reference images are also included to make it simple to compare the mirrored SCT plates and maps with those that appear in other atlases. This edition still uses the original photographs taken by Commander Henry Hatfield using his 12-inch reflector, but they have been digitally re-mastered to reveal significantly more lunar surface detail. The key maps, on which lunar features can be readily identified, have been reversed and updated but retain the style and clarity that made the original a standard bearer in the field.

A new chapter on modern lunar observing techniques has been added to show amateur astronomers just how many interesting lunar observing projects they can still participate in. Computer-generated sunrise and sunset visualizations of many interesting selected areas have been included, to encourage astronomers to study and learn about the topographic appearance of the lunar surface near the morning and evening terminators. This welcome second edition brings a trove of new resources while still retaining the comprehensive appeal of the original.