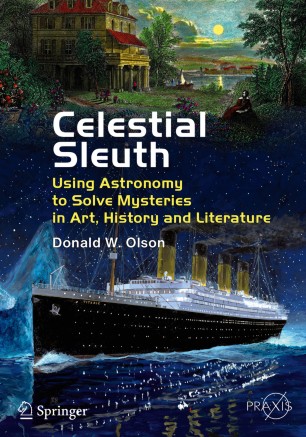 Using Astronomy to Solve Mysteries in Art, History and Literature

Many mysteries in art, history, and literature can be solved using “forensic” astronomy, including calculating phases of the Moon, determining the positions of the planets and stars, and identifying celestial objects. In addition to helping to crack difficult cases, such studies spark our imagination and provide a better understanding of the skies. Weather facts, volcanic studies, topography, tides, historical letters and diaries, military records and the friendly assistance of experts in related fields help with the work.

Topics or cases pursued were chosen for their wide public recognition and intrigue and involve artists such as Vincent van Gogh and Claude Monet; historical events such as the Battle of Marathon, Julius Caesar's invasion of Britain, and World War II; and literary authors such as Chaucer, Shakespeare, and Mary Shelley.

For each historical event influenced by astronomy, there is a different kind of mystery to be solved. For example, how can the Moon help to explain the sinking of the Titanic and a turning point of the American Civil War? For each literary reference to astronomy, which celestial objects were being described and was the author describing an actual event?

Follow these exciting investigations with Donald Olson, a master “celestial sleuth,” as he tracks down the truth and helps unravel mysteries as far back as ancient history and as recent as the haunting paintings of Edvard Munch.