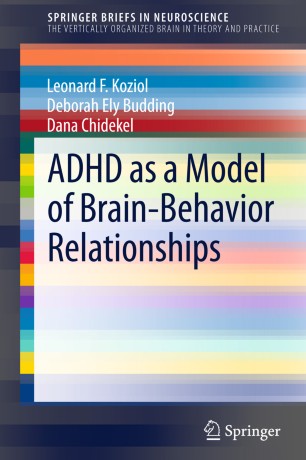 ADHD as a Model of Brain-Behavior Relationships

Part of the SpringerBriefs in Neuroscience book series (BRIEFSNEUROSCI)

ADHD as a Model of Brain-Behavior Relationships

Subseries: The Vertically Organized Brain in Theory and Practice

It's been a basic neurological given: the brain does our thinking, and has evolved to do the thinking, as controlled by the neocortex. In this schema, all dysfunction can be traced to problems in the brain’s lateral interactions. But in scientific reality, is this really true? Challenging this traditional cortico-centric view is a body of research emphasizing the role of the structures that control movement--the brain's vertical organization--in behavioral symptoms.

Using a well-known, widely studied disorder as a test case, ADHD as a Model of Brain-Behavior Relationships offers an innovative framework for integrating neuroscience and behavioral research to refine diagnostic process and advance the understanding of disorders. Identifying a profound disconnect between current neuropsychological testing and the way the brain actually works, this revision of the paradigm critiques the DSM and ICD in terms of the connectedness of brain structures regarding cognition and behavior. The authors argue for a large-scale brain network approach to pathology instead of the localizing that is so common historically, and for an alternate set of diagnostic criteria proposed by the NIMH. Included in the coverage:

Heralding a more accurate future of assessment, diagnosis, and treatment of neurodevelopmental disorders, ADHD as a Model of Brain-Behavior Relationships represents a major step forward for neuropsychologists, child psychologists, and psychiatrists, or any related profession interested in a neuroscientific understanding of brain function.