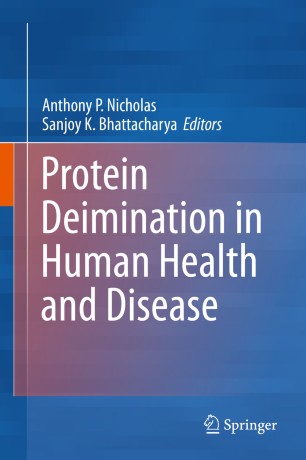 Deimination is a relatively new post-translational modification of proteins, whose recognition is ever-increasing. First linked to the pathology of rheumatoid arthritis (RA), deimination is a process by which selected positively charged arginine amino acids are converted to neutral citrulline amino acids by the peptidyl arginine deiminase (PAD) family of enzymes.

Although the medical literature is rich with articles about the possible significance of deiminated proteins in RA, Protein Deimination in Human Health and Disease is the first publication to compile this knowledge and the growing amount of new information now known about the presence of deiminated proteins in the eye, skin, hair, gums, lung and nervous system, as well. As a result, this process has now been linked to numerous additional conditions besides RA, including cancer, glaucoma, Alzheimer's disease, Parkinson's disease, multiple sclerosis, spinal cord and peripheral nerve injury, Creutzfeldt-Jakob disease, among many others.

Chronicling the earliest studies of deimination up to the present, this volume distills what is currently known about citrullination of proteins in the human body and is the first book of its kind on the topic.