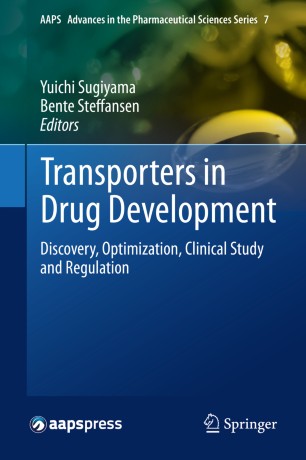 Transporters in Drug Development examines how membrane transporters can be dealt with in academic-industrial drug discovery and pharmaceutical development as well as from a regulatory perspective. The book describes methods and examples of in vitro characterization of single transporters in the intestines, liver, and kidneys as well as characterization of substrate overlap between various transporters. Furthermore, probes and biomarkers are suggested for studies of the transporters’ impact on the pharmacokinetics of drug substrates/candidates interacting on transporters. The challenges of translating in vitro observed interaction of transporters into in vivo relevance are explored, and the book highlights perspectives of applying targeted proteomics and mechanistic modeling in this process.

Yuichi Sugiyama is head of Sugiyama Laborator at RIKEN Innovation Center, RIKEN Research Cluster for Innovation in Yokohama, Japan, and previously professor in the Department of Molecular Pharmacokinetics at the University of Tokyo from 1991 through to his retirement from the University in 2012. He is coauthor of more than 580 publications in international journals as well as 270 book chapters and review articles. His work is internationally recognized by prestigious awards, including AAPS Distinguished Pharmaceutical Scientist Award (2003), FIP Hoest Madsen Gold Medal (2009), “Medal with Purple Ribbon” given by the government in 2010, and the B. Brodie Award from ASPET (2012). Professor Sugiyama has been ranked as the top-cited scientist in the field of Pharmacology & Toxicology (1997–2007). He served as the chairman of the Board of Pharmaceutical Sciences in FIP and was also the president of both the International Society for the Study of Xenobiotics (ISSX) and Japanese Society for Xenobiotic Metabolism and Disposition (JSSX).

Bente Steffansen is associate professor in transporters in ADME at the Faculty of Health and Medical Sciences, University of Copenhagen. She graduated with MSc (pharm) in 1989 from the Royal Danish School of Pharmacy and obtained her PhD in 1994 under the Danish Research Academy within the field of prodrug design aimed for improved drug delivery. Dr. Steffansen has published more than 60 research articles, edited a book, and serves as the program director for pharmaceutical education at the University of Copenhagen. She is a member of the Chemical Committee under the National Pharmacopeia Board and a member of the European BioSim network of excellence.