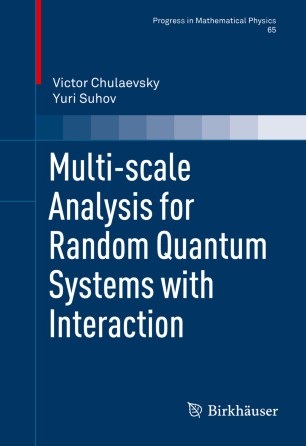 The study of quantum disorder has generated considerable research activity in mathematics and physics over past 40 years. While single-particle models have been extensively studied at a rigorous mathematical level, little was known about systems of several interacting particles, let alone systems with positive spatial particle density. Creating a consistent theory of disorder in multi-particle quantum systems is an important and challenging problem that largely remains open. Multi-scale Analysis for Random Quantum Systems with Interaction  presents the progress that had been recently achieved in this area.

The main focus of the book is on a rigorous derivation of the multi-particle localization in a strong random external potential field. To make the presentation accessible to a wider audience, the authors restrict attention to a relatively simple tight-binding Anderson model on a cubic lattice Zd.

* an extensive discussion of relevant technical aspects of the localization theory

* a self-contained rigorous derivation of both spectral and dynamical localization in the multi-particle tight-binding Anderson model.

Required mathematical background for the book includes a knowledge of functional calculus, spectral theory (essentially reduced to the case of finite matrices) and basic probability theory. This is an excellent text for a year-long graduate course or seminar in mathematical physics. It also can serve as a standard reference for specialists.