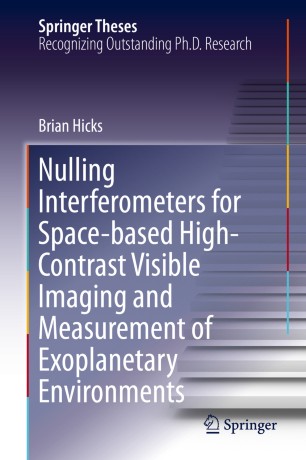 High-contrast astronomical imaging has progressed significantly in the past decade. Many of these techniques have been laboratory demonstrated to perform at contrast levels adequate for the detection of Solar System-like planets and dust around nearby stars. None of them, however, have been demonstrated in space. The state of the art in high-contrast imaging systems that have been built for space-based observation, the environment best suited for spectroscopic study of exo-Earths, is the nulling interferometer that was flown on the Planetary Imaging Concept Testbed Using a Rocket Experiment (PICTURE). The PICTURE nulling interferometer, built from multiple optical elements, relies on the incorporation of additional dispersive components in order to deliver the broadband performance preferred for faint object imaging. These elements add to the cost, complexity, and misalignment risk of the instrument.

The Monolithic Achromatic Nulling Interference Coronagraph (MANIC) Brian Hicks describes in this thesis is the first optic of its kind. He has taken the multiple optical element concept described in earlier works from theory to a flyable monolithic optic. Brian Hicks has advanced the state of the art in nulling interferometers by improving optical stability and robustness. Following application of the fabrication method described in this work, the design of MANIC also allows for broader band performance at higher contrast than that achieved with the PICTURE nulling interferometer.