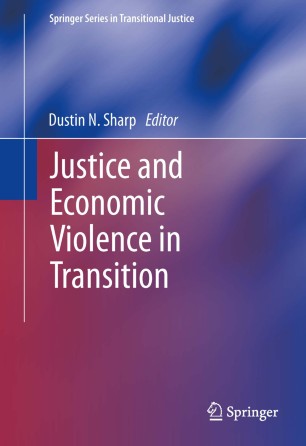 Justice and Economic Violence in Transition

The field of transitional justice has traditionally focused on addressing large-scale human-rights violations involving murder, torture, kidnapping, and rape. But since violations of economic rights often lead to conflict, are perpetrated during conflict, and continue as a post-conflict legacy, it is crucial to pay greater attention to economic and social rights in the transitional justice context as well.

A forceful addition to the peace and justice literatures, Justice and Economic Violence in Transition explores the power and potential inherent in adding issues of economic justice to the transitional justice agenda. New papers by established and emerging scholars analyze post-conflict interventions used in addressing extreme poverty, corruption, and the plunder of natural resources, probing the complex questions these efforts raise at the theoretical, practice, and policy levels. In this nuanced context, economic justice is firmly situated within the larger tasks of peacebuilding, and shown as essential to preventing further violence. Among the topics covered in depth:

Major steps towards a more holistic view of transitional justice are both timely and necessary. Justice and Economic Violence in Transition is a unique guide intended for an interdisciplinary audience, appealing to scholars and policymakers in fields ranging from conflict resolution, peacebuilding, developmental economics, and political science to international law and human rights.