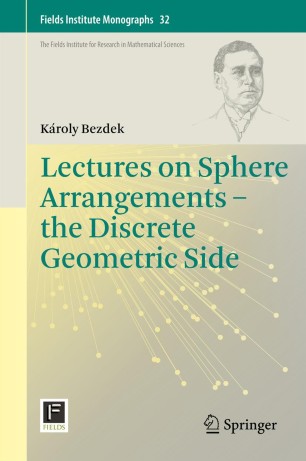 Lectures on Sphere Arrangements – the Discrete Geometric Side

This monograph gives a short introduction to parts of modern discrete geometry, in addition to leading the reader to the frontiers of geometric research on sphere arrangements. The readership is aimed at advanced undergraduate and early graduate students, as well as interested researchers.  It contains 30 open research problems ideal for graduate students and researchers in mathematics and computer science. Additionally, this book may be considered ideal for a one-semester advanced undergraduate or graduate level course.

The core of this book is based on three lectures given by the author at the Fields Institute during the thematic program on Discrete Geometry and Applications and contains four basic topics. The first two deal with active areas that have been outstanding from the birth of discrete geometry, namely dense sphere packings and tilings. Sphere packings and tilings have a very strong connection to number theory, coding, groups, and mathematical programming. Extending the tradition of studying packings of spheres is the investigation of the monotonicity of volume under contractions of arbitrary arrangements of spheres. The third major topic can be found under the sections on ball-polyhedra that study the possibility of extending the theory of convex polytopes to the family of intersections of congruent balls. This section of the text is connected in many ways to the above-mentioned major topics as well as to some other important research areas such as that on coverings by planks (with close ties to geometric analysis). The fourth basic topic is discussed under covering balls by cylinders.

“This is an exciting book aimed at graduate students and researchers as it contains a multitude of open problems after leading the reader to the research frontier.” (Kelly J. Pearson, zbMATH, Vol. 1281, 2014)