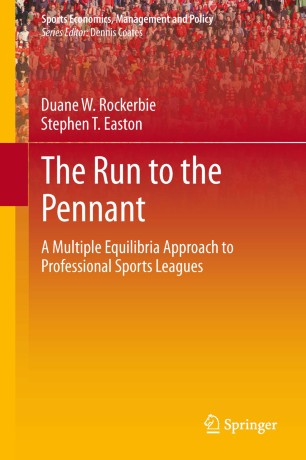 The Run to the Pennant

A number of clubs in professional sports leagues exhibit winning streaks over a number of consecutive seasons that do not conform to the standard economic model of a professional sports league developed by El Hodiri and Quirk (1994) and Fort and Quirk (1995). These clubs appear to display what we term "unsustainable runs", defined as a period of two to four seasons where the club acquires expensive talent and attempts to win a league championship despite not having the market size to sustain such a competitive position in the long run. The standard model predicts that clubs that locate in large economic markets will tend to acquire more talent, achieve more success on the field and at the box office than clubs that are located in small markets. This book builds a model that can allow unsustainable runs yet retains most of the features of the standard model.  The model is then subjected to empirical verification.  The new model we develop in the book has as its central feature the possibility of generating two equilibria for a club. In the empirical sections of the book, we use time-series analysis to attempt to test for the presence of unsustainable runs using historical data from National Football League (NFL), National Basketball Association (NBA), National Hockey League (NHL) and Major League Baseball (MLB).  The multiple equilibria model retains all of the features of the standard model of a professional sports league that is accepted quite universally by economists, yet it offers a much richer approach by including an exploration of the effects of revenues that are earned at the league level (television, apparel, naming rights, etc.) that are then shared by all of the member clubs, making this book unique and of great interest to scholars in a variety of fields in economics.