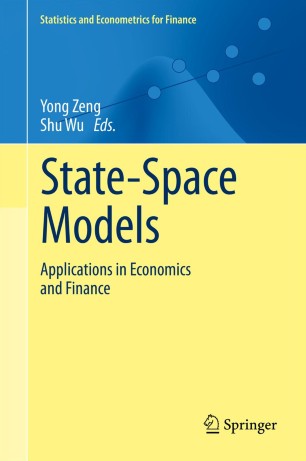 Applications in Economics and Finance

Part of the Statistics and Econometrics for Finance book series (SEFF, volume 1)

State-space models as an important mathematical tool has been widely used in many different fields. This edited collection explores recent theoretical developments of the models and their applications in economics and finance. The book includes nonlinear and non-Gaussian time series models, regime-switching and hidden Markov models, continuous- or discrete-time state processes, and models of equally-spaced or irregularly-spaced (discrete or continuous) observations. The contributed chapters are divided into four parts. The first part is on Particle Filtering and Parameter Learning in Nonlinear State-Space Models. The second part focuses on the application of Linear State-Space Models in Macroeconomics and Finance. The third part deals with Hidden Markov Models, Regime Switching and Mathematical Finance and the fourth part is on Nonlinear State-Space Models for High Frequency Financial Data.  The book will appeal to graduate students and researchers studying state-space modeling in economics, statistics, and mathematics, as well as to finance professionals.

Yong Zeng is a professor in Department of Mathematics and Statistics at University of Missouri at Kansas City. His main research interest includes mathematical finance, financial econometrics, stochastic nonlinear filtering, and Bayesian statistical analysis. Notably, he developed the statistical analysis via filtering for financial ultra-high frequency data, where the model can be viewed as a random-arrival-time state space model. He has published in Mathematical Finance, International Journal of Theoretical and Applied Finance, Applied Mathematical Finance, IEEE Transactions on Automatic Control, Statistical Inference for Stochastic Processes, among others. He held visiting associate professor positions at Princeton University and the University of Tennessee.  He received his B.S. from Fudan University in 1990, M.S. from University of Georgia in 1994, and Ph.D. from University of Wisconsin at Madison in 1999. All degrees were in statistics.

Shu Wu is an associate professor in Department of Economics at University of Kansas. His main research areas are empirical macroeconomics and finance. He has held visiting positions at Federal Reserve Bank at Kansas City, City University of Hong Kong. His publications have appeared in Journal of Monetary Economics, Journal of Money, Credit and Banking, Macroeconomic Dynamics, International Journal of Theoretical and Applied Finance, Journal of International Financial Markets, Institutions and Money, Handbook of Quantitative Finance and Risk Management, Hidden Markov Models in Finance among others. He received his Ph.D. in economics from Stanford University in 2000.