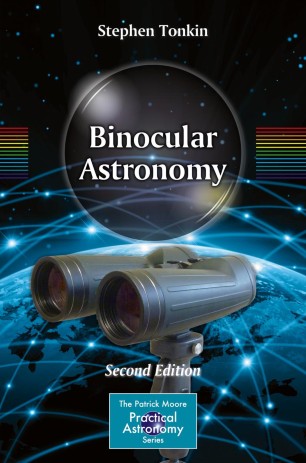 Binoculars have, for many, long been regarded as an “entry level” observational tool, and relatively few have used them as a serious observing instrument. This is changing! Many people appreciate the relative comfort of two-eyed observing, but those who use binoculars come to realize that they offer more than comfort. The view of the stars is more aesthetically pleasing and therefore binocular observers tend to observe more frequently and for longer periods.

Binocular Astronomy, 2nd Edition, extends its coverage of small and medium binoculars to large and giant (i.e., up to 300mm aperture) binoculars and also binoviewers, which brings the work into the realm of serious observing instruments. Additionally, it goes far deeper into the varying optical characteristics of binoculars, giving newcomers and advanced astronomers the information needed to make informed choices on purchasing a pair. It also covers relevant aspects of the physiology of binocular (as in “both eyes”) observation.

The first edition of this title was praised for its suggested objects for observation and especially for the finder charts for each object. In this second edition, this section is expanded in three ways. There are new objects, more information on each object, and a re-organization of the objects for binoculars for easier selection.

Binocular Astronomy 2nd Edition puts an emphasis on understanding binoculars and their use. The additional content reflects the latest developments in technology, new testing techniques, and practical ideas for binocular use. It also responds to the substantially positive reviews of the first edition, and is now even better suited to its target readership.

Stephen Tonkin, BSc (Hons), F.R.A.S. has been a keen amateur astronomer since childhood and now spends most of his time doing astronomical education and outreach, both as a Lecturer in Astronomy for an adult education college, and independently with his own organization, The Astronomical Unit. He organizes and leads astronomy courses and talks, public observing, and astronomy-related storytelling for children and adults. In 2000, he was elected as a Fellow of the Royal Astronomical Society.

He has been using binoculars for astronomy for over forty years, initially under the pristine African skies under which he grew up, and as his main observing instrument for the last decade. He actively promotes and encourages the use of binoculars within the amateur astronomy community and publishes a monthly e-zine, The Binocular Sky Newsletter, for binocular astronomers. He also writes the monthly Binocular Tour in Sky at Night magazine.

He now lives on the edge of the New Forest, which has some of the darkest skies in southern England. On clear moonless nights when he's not working, he can usually be found at one of these dark sites, exploring the night sky with his binoculars.