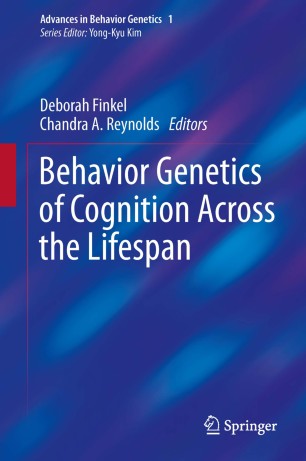 Behavior Genetics of Cognition Across the Lifespan

Behavior Genetics of Cognition across the Lifespan

One of the primary advances for the 21st century is progress beyond the need to defend the findings of behavioral genetic investigations of intelligence. With the advent of developmental behavioral genetics—and molecular genetics—researchers have taken their discoveries far beyond simple nature/nurture constructs to a finer understanding of how genes and environment intersect to affect cognitive function.

Behavior Genetics of Cognition across the Lifespan presents the state of the field in well-documented detail as noted experts examine gene-environment interactions in cognitive function from childhood into old age. Fluidity is at the heart of this coverage: normative and non-normative brain development get equal attention, and statistical, molecular, biological, brain imaging, and neurobiological approaches contribute separately and in combination to the findings.

All major life stages are examined as periods of gene-based cognitive change, including midlife, which until recently has been considered a period for marking time until "real" age-related change occurs. And the book is written so that individual chapters can be as useful on their own as the volume is as a whole. Among the topics covered in depth:

By synthesizing where the field is today--and identifying issues that need further attention--Behavior Genetics of Cognition across the Lifespan is a bedrock text for behavioral geneticists, cognitive psychologists and neuroscientists.