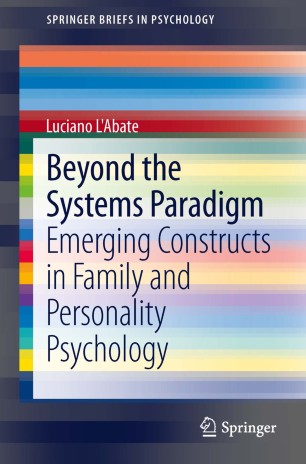 Beyond the Systems Paradigm

Mother, father, children together in a household. The number of U.S. families fitting that profile is declining steadily. And yet this arrangement is still the basis of so much of family systems theory and therapy--while the disconnect between theory and therapy is widening.

In response, Beyond the Systems Paradigm argues for the critical place of the individual in family psychology, and for the ties between family and personality psychologies as a key to modernizing systems theory and practice. The latest offering from Luciano L'Abate builds on his earlier work by analyzing the intricate relationships between conceptual ideas and clinical reality, and how this knowledge can translate into more robust theory, useful research, and effective assessment and therapy with families. The author adds new constructs of identity and intimacy to refine his Relational Competence Theory, and his new models update--and find common ground between--traditional family and personality constructs. A perspective-building tool for organizing how one understands theory and does therapy, this timely volume:

For family therapists and clinicians as well as personality theorists, Beyond the Systems Paradigm provides the structure to make theory relevant, and the flexibility to make it practical.

Since his retirement in 1990, Luciano L’Abate, Ph.D. has been Professor Emeritus at Georgia State University where he was previously a Professor of Psychology beginning in 1965. L’Abate has been an editorial board member of many national and foreign professional and scientific journals, as well as a consultant to various publishing houses. He is the author and co-author of over 300 papers, chapters, and book reviews in professional journals in addition to authoring/editing 34 books. His work has been translated into Chinese, Japanese, Finnish, Spanish, French, Polish, and German languages. Dr. L’Abate is the recipient of many awards including "Family Psychologist of the Year for 1994" by Division 43 of the American Psychological Association, "Outstanding Contribution" by the Georgia Association for Marriage and Family Therapy, and "Outstanding Citizen" by the House of Representatives in the State of Georgia. He has also held workshops and lectured extensively in the United States, Australia, Canada, New Zealand, Japan, Germany, Spain, and Italy. Dr. L’Abate has spent the last several years involved full-time in writing and research since his retirement from Georgia State University.

“In Beyond the Systems Paradigm: Emerging Constructs in Family and Personality Psychology, Luciano L’Abate proposes that family systems theory and personality theory be integrated in order to create a unifying theory of human relationships. … to those already familiar with and appreciative of L’Abate’s work.” (Nancy Murdock and Christopher Davids, PsycCRITIQUES, Vol. 58 (48), December, 2013)
Buy options