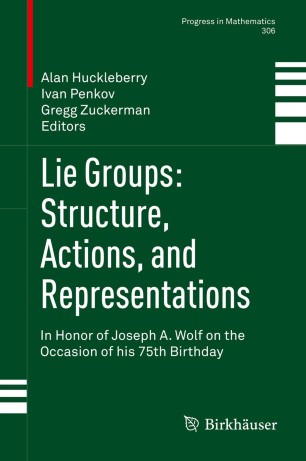 In Honor of Joseph A. Wolf on the Occasion of his 75th Birthday

Part of the Progress in Mathematics book series (PM, volume 306)

Lie Groups: Structures, Actions, and Representations, In Honor of Joseph A. Wolf on the Occasion of his 75th Birthday consists of invited expository and research articles on new developments arising from Wolf's profound contributions to mathematics. Due to Professor Wolf’s broad interests, outstanding mathematicians and scholars in a wide spectrum of mathematical fields contributed to the volume.  Algebraic, geometric, and analytic methods are employed. More precisely, finite groups and classical finite dimensional, as well as infinite-dimensional Lie groups, and algebras play a role. Actions on classical symmetric spaces, and on abstract homogeneous and representation spaces are discussed. Contributions in the area of representation theory involve numerous viewpoints, including that of algebraic groups and various analytic aspects of harmonic analysis.