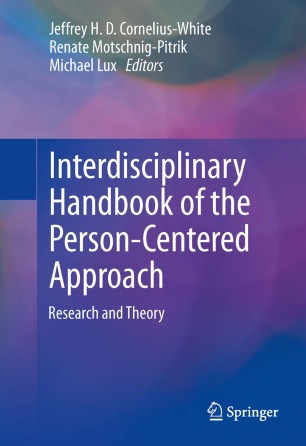 Interdisciplinary Handbook of the Person-Centered Approach

The legacy of Carl Rogers endures in humanistic approaches to psychology, education, human development, communication, and spirituality. His Person-Centered Approach (PCA) promotes the evolution of the human organism and relationships, which lends itself to rewarding partnerships with a variety of scientific and philosophical theories.

The Interdisciplinary Handbook of the Person-Centered Approach examines these connections for a deeper understanding of how—and why—this humanistic approach works in client-centered psychotherapy and beyond. Chapters link key constructs of the PCA to research and theory in a variety of fields to bring new significance to self-determination, interpersonal relationships, human attachment, social neuroscience and other related fields. Taken together, this research and theory unites the sciences and the humanities, and the objective with the subjective, to arrive at a clearer picture of the complete, authentic person. A companion volume on applications will demonstrate these connections in practice across various fields for further insights into the utility of the approach. Interdisciplinary collaborations featured in the book link the PCA with:

The Interdisciplinary Handbook of the Person-Centered Approach: Research and Theory will benefit researchers  and practitioners who want to deepen their understanding and practice. Its usefulness to researchers and students crosses a variety of sciences, such as psychology, neuroscience, therapy, education, communication, and medicine. A unique feature of the book are concept maps that may inspire further interdisciplinary connections across many fields.

Jeffrey H. D. Cornelius-White, Psy.D., LPC is Professor of Counseling at Missouri State University and doctoral faculty at the University of Missouri-Columbia. He is former editor of The Person-Centered Journal and former chair of the World Association for Person-Centered and Experiential Psychotherapy and Counseling. He has published more than 75 works, including Learner-Centered Instruction (Sage, 2010 with Adam Harbaugh), Facilitating Young People’s Development (PCCS, 2008 with Michael Behr), and Carl Rogers: The China Diary (PCCS, 2012). Jef studied at the Chicago Counseling Center and the Pre-Therapy Institute and is a graduate of Argosy University-Chicago. He enjoys cycling, volleyball, his friends and family.

Renate Motschnig-Pitrik, born in Ostrava, Czech Republic, is a professor of computer science and head of the Computer Science Didactics and Learning Research Center at the University of Vienna, Austria. Renate held positions at the RWTH Aachen in Germany, the University of Toronto, Canada, and teaches and cooperates with the Masaryk University in Brno, Czech Republic. She participated in encounter groups and several events based on the Person-Centered Approach. She is deeply interested in the multiple ways in which mutual understanding and whole-person learning happen. She is an author/co-author of more than 130 scientific articles, one book, and is determined to foster a style in education that is based on person-centered attitudes, our co-actualizing potential, and thoughtful support by web-based technology. She appreciates synergies between presence and distance, and a multitude of (scientific) disciplines and cultures.

Michael Lux, born in Stuttgart, Germany, has Master degrees in psychology and gerontology. He is a certified person-centered psychotherapist and works as a psychotherapist and neuropsychologist in the Neurological Rehabilitation Center Quellenhof in Bad Wildbad, Germany. Over the past few years, he has been intensively engaged with linkages between the Person-Centered Approach (PCA) and neuroscience. As a result he developed the model of a neuroscientifically based person-centered psychotherapy, which he described in a book and in scientific articles. Furthermore, he gives lectures and workshops on the neuroscientific bases of the PCA at conferences and training institutes.