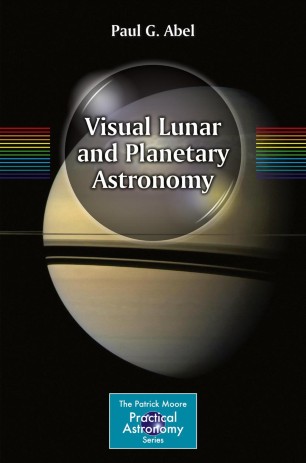 With the advent of CCDs and webcams, the focus of amateur astronomy has to some extent shifted from science to art. The object of many amateur astronomers is now to produce “stunning images” that, although beautiful, are not intended to have scientific merit. Paul Abel has been addressing this issue by promoting visual astronomy wherever possible – at talks to astronomical societies, in articles for popular science magazines, and on BBC TV’s The Sky at Night.

Visual Lunar and Planetary Astronomy is a comprehensive modern treatment of visual lunar and planetary astronomy, showing that even in the age of space telescopes and interplanetary probes it is still possible to contribute scientifically with no more than a moderately priced commercially made astronomical telescope.

It is believed that imaging and photography is somehow more objective and more accurate than the eye, and this has led to a peculiar “crisis of faith” in the human visual system and its amazing processing power. But by analyzing observations from the past, we can see how accurate visual astronomy really is! Measuring the rotational period of Mars and making accurate lunar charts for American astronauts were all done by eye.

The book includes sections on how the human visual system works, how to view an object through an eyepiece, and how to record observations and keep a scientific notebook. The book also looks at how to make an astronomical, rather than an artistic, drawing. Finally, everything here will also be of interest to those imagers who wish to make their images more scientifically applicable by combining the methods and practices of visual astronomy with imaging.