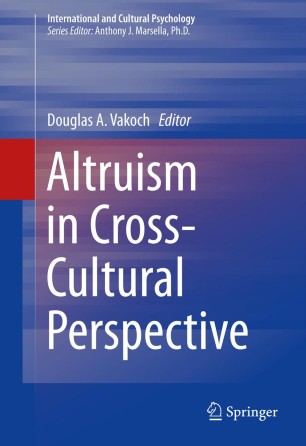 Doing for others--altruism--is arguably one of the most human of our activities. Arguable too are the origins of altruism: biology, psychology, culture, all of the above? Researchers have been exploring all three in intriguing lines of inquiry. But as the world grows smaller, culture grows as a major dimension in how, and why, people help others.

The contributors to Altruism in Cross-Cultural Perspective employ a wealth of methods to examine selfless acts on a global scale. Extensive discussions help to define this elusive concept, in some cases expanding it to include empathy, cooperation, generosity, and Eastern and Western spirituality. Considerations of gender, urban/rural life, family relationships, and other key variables are included, as are relevant findings from evolutionary psychology and neuroscience. And inroads are made in answering such longstanding questions as why altruistic acts in one culture may not be perceived as such in others, and the costs of altruism to those who give. Among the topics featured:

Altruism in Cross-Cultural Perspective is timely reading for cross-cultural scholars and researchers of altruism and other pro-social behavior. Researchers from various disciplines will be especially interested in the book, including psychology, anthropology, sociology, biology, communication, philosophy, religious studies, gender studies, and bioethics.