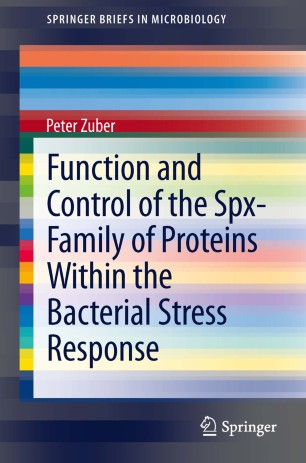 Part of the SpringerBriefs in Microbiology book series (BRIEFSMICROBIOL, volume 8)

This SpringerBrief on Spx reviews the investigations that led to the discovery of Spx and its orthologs and ties together the results of various studies that have explored the function and control of spx in Gram-positive organisms.  Spx of Bacillus subtilis has been extensively studied, but very little has been published about it. This book incorporates a number of studies that have been conducted in other Gram positive bacteria, which examined the role of Spx orthologs in stress response, bacterial development and virulence.

The book contains an overview that will introduce the protein and its orthologous forms, its association with RNA polymerase, the species of Gram-positive bacteria in which it is found, and the conditions in which it is abundant and active. Spx is a member of a large group of proteins belonging to the ArsC/Spx protein family, so the review touches upon the bioinformatic support for the protein family composition and its meaning with regard to protein structure/function. ​