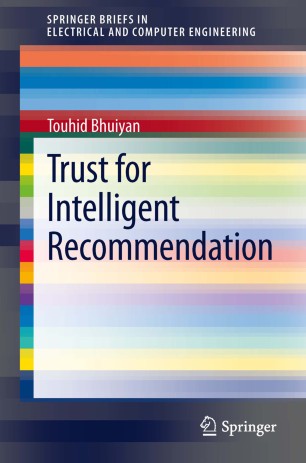 Recommender systems are one of the recent inventions to deal with the ever-growing information overload in relation to the selection of goods and services in a global economy. Collaborative Filtering (CF) is one of the most popular techniques in recommender systems. The CF recommends items to a target user based on the preferences of a set of similar users known as the neighbors, generated from a database made up of the preferences of past users. In the absence of these ratings, trust between the users could be used to choose the neighbor for recommendation making. Better recommendations can be achieved using an inferred trust network which mimics the real world “friend of a friend” recommendations. To extend the boundaries of the neighbor, an effective trust inference technique is required.

This book proposes a trust interference technique called Directed Series Parallel Graph (DSPG) that has empirically outperformed other popular trust inference algorithms, such as TidalTrust and MoleTrust. For times when reliable explicit trust data is not available, this book outlines a new method called SimTrust for developing trust networks based on a user’s interest similarity. To identify the interest similarity, a user’s personalized tagging information is used. However, particular emphasis is given in what resources the user chooses to tag, rather than the text of the tag applied. The commonalities of the resources being tagged by the users can be used to form the neighbors used in the automated recommender system. Through a series of case studies and empirical results, this book highlights the effectiveness of this tag-similarity based method over the traditional collaborative filtering approach, which typically uses rating data.

Trust for Intelligent Recommendation is intended for practitioners as a reference guide for developing improved, trust-based recommender systems. Researchers in a related field will also find this book valuable.