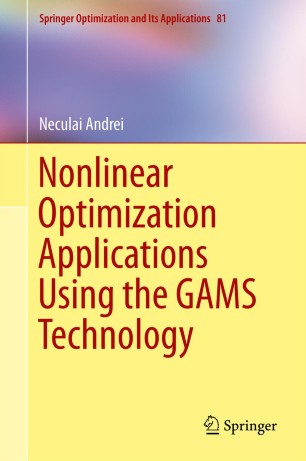 Part of the Springer Optimization and Its Applications book series (SOIA, volume 81)

Nonlinear Optimization Applications Using the GAMS Technology develops a wide spectrum of nonlinear optimization applications expressed in the GAMS (General Algebraic Modeling System) language. The book is highly self-contained and is designed to present applications in a general form that can be easily understood and quickly updated or modified to represent situations from the real world.  The book emphasizes the local solutions of the large-scale, complex, continuous nonlinear optimization applications, and the abundant  examples in GAMS are highlighted by those involving ODEs, PDEs, and optimal control. The collection of these examples will be useful for software developers and testers.

This book  is primarily intended to serve as a reference for graduate students and for scientists working in various disciplines of industry/mathematical programming that use optimization methods to model and solve problems.  It is also well suited as supplementary material for seminars in optimization, operations research, and decision making, to name a few.