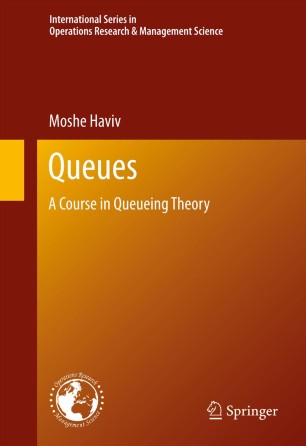 A Course in Queueing Theory

Queueing theory (the mathematical theory of waiting lines in all its configurations) continues to be a standard major area of operations research on the stochastic side.  Therefore, universities with an active program in operations research sometimes will have an entire course devoted mainly or entirely to queueing theory, and the course is also taught in computer science, electrical engineering, mathematics, and industrial engineering programs.

The basic course in queueing theory is often taught at first year graduate level, though can be taught at senior level undergraduate as well.  This text evolved from the author’s preferred syllabus for teaching the course, presenting the material in a more logical order than other texts and so being more effective in teaching the basics of queueing theory.

The first three chapters focus on the needed preliminaries, including exposition distributions, Poisson processes and generating functions, renewal theory, and Markov chains,  Then, rather than switching to first-come first-served memoryless queues here as most texts do, Haviv discusses the M/G/1 model instead of the M/M/1, and then covers priority queues. Later chapters cover the G/M/1 model, thirteen examples of continuous-time Markov processes, open networks of memoryless queues and closed networks, queueing regimes with insensitive parameters, and then concludes with two-dimensional queueing models which are quasi birth and death processes.  Each chapter ends with exercises.

Moshe Haviv is a Professor of Statistics and Department Head at the Hebrew University in Jerusalem, Israel. He received his B.Sc. in Mathematics at Tel Aviv University, and his M.A. in Administrative Sciences and Ph.D. in Operations Research/Management Science both at Yale University. His research interests include Operations Research, Queueing Models, decision making and strategic behavior in queues, Markov decision processes, and large Markov chains. He is a member of the Center for Rationality at the Hebrew University, and is a visiting professor (summers) in Operations Management and Econometrics at the University of Sydney.