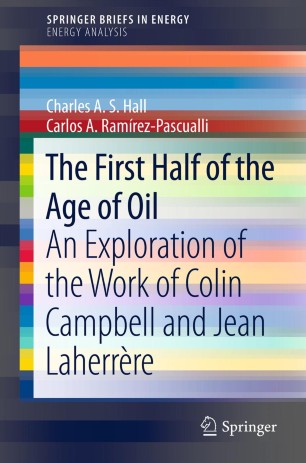 The First Half of the Age of Oil

An Exploration of the Work of Colin Campbell and Jean Laherrère

According to the conventional wisdom, we live in a post-industrial information age. This book, however, paints a different picture: We live in the age of oil. Petroleum fuels and feedstocks are responsible for much of what we take for granted in modern society, from chemical products such as fertilizer and plastics, to the energy that moves people and goods in a global economy.  Oil is a nearly perfect fuel: Energy dense, safe to store, easy to transport, and mostly environmentally benign. Most importantly, oil has been cheap and abundant during the past 150 years. In 1998, two respected geologists, Colin Campbell and Jean Laherrère, published a detailed article announcing that the “end of cheap oil” would happen before 2010, which meant that the world would face a peak, or at least a plateau, in global daily oil production in the first decade of the new millennium. Today, two billion people under the age of 14 have lived the majority of their lives past the point when this century-long growth in oil supplies came to an end, which also marks the end of the first half of the age of oil. This transition has ushered in a new reality of high oil prices, stagnating oil supplies, and sluggish economies. In this book, a leading authority on energy explores the contributions and continuing legacy of Colin Campbell and Jean Laherrère, the two geologists who modified the terms of the debate about oil. The book provides a unique perspective and state-of-the-art overview of today’s energy reality and its enormous economic and social implications.

-  Explores the works of Colin Campbell and Jean Laherrère, the leading authorities in the field of Peak Oil, authors of “The End of Cheap Oil” (Scientific American, 1998), and founding members of the Association for the Study of Peak Oil & Gas

-  Addresses a broad audience of scientists, engineers, and economists in a format that is accessible to the general public

-  Provides a complete overview of the basic geological, chemical, physical, economic and historical concepts that every oil consumer should understand