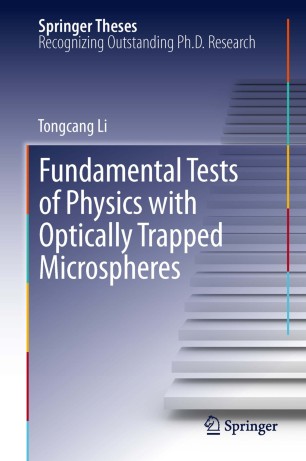 Fundamental Tests of Physics with Optically Trapped Microspheres details experiments on studying the Brownian motion of an optically trapped microsphere with ultrahigh resolution and the cooling of its motion towards the quantum ground state.

Glass microspheres were trapped in water, air, and vacuum with optical tweezers; and a detection system that can monitor the position of a trapped microsphere with Angstrom spatial resolution and microsecond temporal resolution was developed to study the Brownian motion of a trapped microsphere in air over a wide range of pressures. The instantaneous velocity of a Brownian particle, in particular, was measured for the very first time, and the results provide direct verification of the Maxwell-Boltzmann velocity distribution and the energy equipartition theorem for a Brownian particle. For short time scales, the ballistic regime of Brownian motion is observed, in contrast to the usual diffusive regime.

In vacuum, active feedback is used to cool the center-of-mass motion of an optically trapped microsphere from room temperature to a minimum temperature of about 1.5 mK. This is an important step toward studying the quantum behaviors of a macroscopic particle trapped in vacuum.