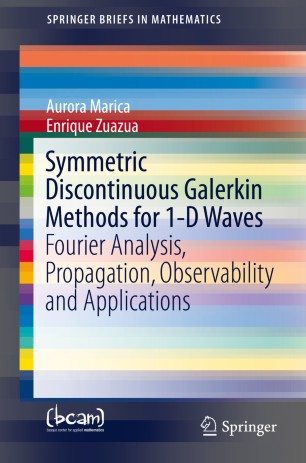 This work describes the propagation properties of the so-called symmetric interior penalty discontinuous Galerkin (SIPG) approximations of the 1-d wave equation. This is done by means of linear approximations on uniform meshes. First, a careful Fourier analysis is constructed, highlighting the coexistence of two Fourier spectral branches or spectral diagrams (physical and spurious) related to the two components of the numerical solution (averages and jumps). Efficient filtering mechanisms are also developed by means of techniques previously proved to be appropriate for classical schemes like finite differences or P1-classical finite elements. In particular, the work presents a proof that the uniform observability property is recovered uniformly by considering initial data with null jumps and averages given by a bi-grid filtering algorithm. Finally, the book explains how these results can be extended to other more sophisticated conforming and non-conforming finite element methods, in particular to quadratic finite elements, local discontinuous Galerkin methods and a version of the SIPG method adding penalization on the normal derivatives of the numerical solution at the grid points.  This work is the first publication to contain a rigorous analysis of the discontinuous Galerkin methods for wave control problems. It will be of interest to a range of researchers specializing in wave approximations.