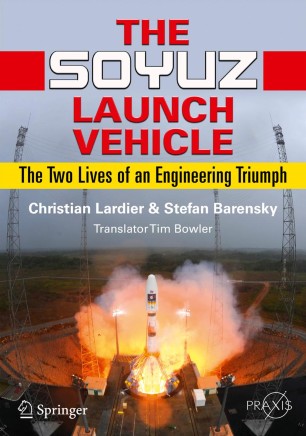 The Two Lives of an Engineering Triumph

The Soyuz launch vehicle has had a long and illustrious history. Built as the world's first intercontinental missile, it took the first man into space in April 1961, before becoming the workhorse of Russian spaceflight, launching satellites, interplanetary probes, every cosmonaut from Gagarin onwards, and, now, the multinational crews of the International Space Station.

This remarkable book gives a complete and accurate description of the two lives of Soyuz, chronicling the cooperative space endeavor of Europe and Russia. First, it takes us back to the early days of astronautics, when technology served politics. From archives found in the Soviet Union the authors describe the difficulty of designing a rocket in the immediate post-war period. Then, in Soyuz's golden age, it launched numerous scientific missions and manned flights which were publicized worldwide while the many more numerous military missions were kept highly confidential!

The second part of the book tells the contemporary story of the second life of Soyuz, gathered from Western sources and interviews with key protagonists. It addresses the sensitive issue of the strategic choices that led to the establishment of Soyuz in French Guiana, describing the role of a few visionaries in Russia and in Europe who decided to leave their respective isolation behind and bring Syouz and Ariane together.

In the final analysis, this book is a profound description of a formidable human adventure.

Christian Lardier has been space editor at Air & Cosmos (www.air-cosmos.com), an aerospace industry news source since 1994, and is the author of several magazine articles as well as the book “La cosmonautique soviétque” (Armand Colin, 1992). From 1991 to 1996, Lardier was accredited by the Ministry of Foreign Affairs in Moscow. To write this book, “The Soyuz Launch Vehicle,” Lardier worked with specialists at the State Research and Production Space-Rocket Center of Samara.

Born in 1965, Stefan Barensky is a professional science and technology writer. He has been reporting on space technologies and industries since 1991 as an editor for multiple French and international space, trade, and political publications such as “Science & Vie,” “Interavia,” “Air & Cosmos,” “Aero Defense News,” and “European Voice.” A former space transportation analyst at Euroconsult and Launchspace, and editor-in-chief of the Orbital Launcher Report monthly newsletter, he also witnessed the gradual Westernizing of Soyuz from the inside as an editorial consultant to Aerospatiale (now Astrium), Arianespace, CNES, ESA.