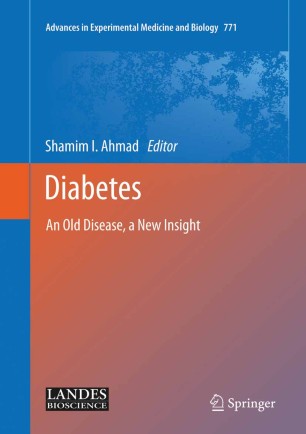 An Old Disease, a New Insight

Part of the Advances in Experimental Medicine and Biology book series (AEMB, volume 771)

Diabetes is a complex disease and is also one of the most common.  It is very difficult to reach an accurate estimate for the global prevalence of diabetes since the standards and methods of data collection vary widely in different parts of the world. In addition, many potential sufferers are not included in the count because according to an estimate about 50% of cases remain undiagnosed for up to 10 years. However, according to an estimate for 2010, globally, there are about 285 million people (amounting to 6.4% of the adult population) suffering from this disease. This number is estimated to increase to 439 million by 2030 if no cure is found. The general increase in life expectancy, leading to an ageing population, and the global rise in obesity are two main reasons for the increase.

With the basic platform set, Editor presents his views and advice to the readers, especially to diabetic patients suffering from T2DM, on the basis of his observations and information collected from other diabetics.