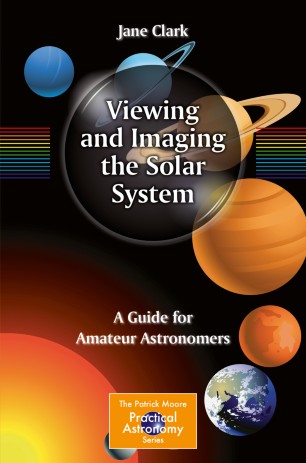 Viewing and Imaging the Solar System

A Guide for Amateur Astronomers

Viewing and Imaging the Solar System: A Guide for Amateur Astronomers is for those who want to develop their ability to observe and image Solar System objects, including the planets and moons, the Sun, and comets and asteroids. They might be beginners, or they may have already owned and used an astronomical telescope for a year or more.

Newcomers are almost always wowed by sights such as the rings of Saturn and the moons of Jupiter, but have little idea how to find these objects for themselves (with the obvious exceptions of the Sun and Moon). They also need guidance about what equipment to use, besides a telescope.

This book is written by an expert on the Solar System, who has had a lot of experience with outreach programs, which teach others how to make the most of relatively simple and low-cost equipment. That does not mean that this book is not for serious amateurs. On the contrary, it is designed to show amateur astronomers, in a relatively light-hearted—and math-free way—how to become serious.

Jane Clark is an English amateur astronomer who earns her living as an engineer. She has a Ph.D. in physics and an MBA from Warwick University. She completed two years of postdoctoral training at Case Western Reserve University in Ohio before returning to England to begin an industrial career.  She became interested in both astronomy and photography as a teenager in the 1970s, photography much more seriously, although as her career progressed and family commitments increased, both interests lapsed. She acquired a telescope in 2006, shortly after completing her MBA, and quickly became hooked on observing. This experience made her realize that astronomy is a lot more fun than business administration. She is a member of Bristol Astronomical Society, and was a founder member of West Norfolk Astronomy Society. Jane gives talks on the Solar System to astronomy clubs, and other societies as diverse as the cub scouts and church wives’ groups; and helps with the public outreach activities of her club in Bristol.

“If you happen to be a young amateur astronomer just starting out with astronomy and observing, then this book might be a good read … . gives a quick and short overview of what a beginner observer might need to know or think of before heading outside on a cold clear night. … if you want to start out a new hobby of astrophotography without any prior knowledge about the night sky, it’s the book to go to.” (Kadri Tinn, AstroMadness.com, November, 2014)
Buy options