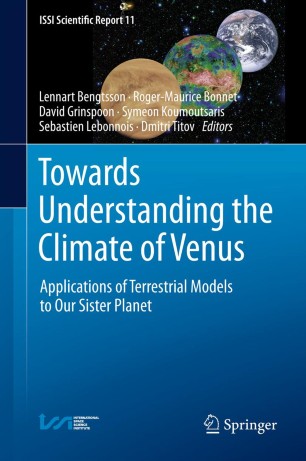 Towards Understanding the Climate of Venus

Applications of Terrestrial Models to Our Sister Planet

ESA’s Venus Express Mission has monitored Venus since April 2006, and scientists worldwide have used mathematical models to investigate its atmosphere and model its circulation. This book summarizes recent work to explore and understand the climate of the planet through a research program under the auspices of the International Space Science Institute (ISSI) in Bern, Switzerland. Some of the unique elements that are discussed are the anomalies with Venus’ surface temperature (the huge greenhouse effect causes the surface to rise to 460°C, without which would plummet as low as -40°C), its unusual lack of solar radiation (despite being closer to the Sun, Venus receives less solar radiation than Earth due to its dense cloud cover reflecting 76% back) and the juxtaposition of its atmosphere and planetary rotation (wind speeds can climb up to 200 m/s, much faster than Venus’ sidereal day of 243 Earth-days).