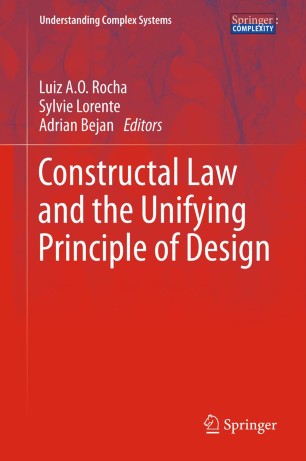 Constructal Law and the Unifying Principle of Design

Design happens everywhere, whether in animate objects (e.g., dendritic lung structures, bacterial colonies, and corals), inanimate patterns (river basins, beach slope, and dendritic crystals), social dynamics (pedestrian traffic flows), or engineered systems (heat dissipation in electronic circuitry). This “design in nature” often takes on remarkably similar patterns, which can be explained under one unifying Constructal Law. This book explores the unifying power of the Constructal Law and its applications in all domains of design generation and evolution, ranging from biology and geophysics to globalization, energy, sustainability, and security.

The Constructal Law accounts for the universal tendency of flow systems to morph into evolving configurations that provide greater and easier access over time. The Constructal Law resolves the many and contradictory ad hoc statements of “optimality”, end design, and destiny in nature, such as minimum and maximum entropy production and minimum and maximum flow resistance, and also explains the designs that are observed and copied in biomimetics.

Constructal Law and the Unifying Principle of Design covers the fundamentals of Constructal Theory and Design, as well as presenting a variety of state-of-the-art applications. Experts from the biological, physical and social sciences demonstrate the unification of all design phenomena in nature, and apply this knowledge to novel designs in modern engineering, such as vascularization for self-healing and self-cooling materials for aircraft, and tree fins and cavities for heat transfer enhancement.

·         Captures a world-wide movement toward design as science

·         Defines the place of the Constructal Law in physics and thermodynamics

·         Features an interdisciplinary approach that spans physics, biology, engineering and the social sciences