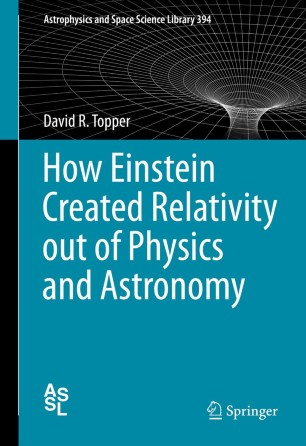 How Einstein Created Relativity out of Physics and Astronomy

This book tracks the history of the theory of relativity through Einstein’s life, with in-depth studies of its background as built upon by ideas from earlier scientists. The focus points of Einstein’s theory of relativity include its development throughout his life; the origins of his ideas and his indebtedness to the earlier works of Galileo, Newton, Faraday, Mach and others; the application of the theory to the birth of modern cosmology; and his quest for a unified field theory. <br> <br>

Treading a fine line between the technical and popular (but not shying away from the occasional equation), this book explains the entire range of relativity and weaves an up-to-date biography of Einstein throughout. The result is an explanation of the world of relativity, based on an extensive journey into earlier physics and a simultaneous voyage into the mind of Einstein, written for the curious and intelligent reader.