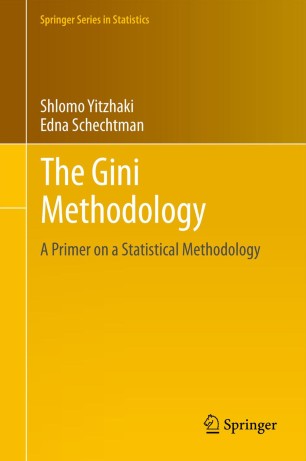 A Primer on a Statistical Methodology

Gini's mean difference (GMD) was first introduced by Corrado Gini in 1912 as an alternative measure of variability. GMD and the parameters which are derived from it (such as the Gini coefficient or the concentration ratio) have been in use in the area of income distribution for almost a century. In practice, the use of GMD as a measure of variability is justified whenever the investigator is not ready to impose, without questioning, the convenient world of normality. This makes the GMD of critical importance in the complex research of statisticians, economists, econometricians, and policy makers.

This book focuses on imitating analyses that are based on variance by replacing variance with the GMD and its variants. In this way, the text showcases how almost everything that can be done with the variance as a measure of variability, can be replicated by using Gini. Beyond this, there are marked benefits to utilizing Gini as opposed to other methods. One of the advantages of using Gini methodology is that it provides a unified system that enables the user to learn about various aspects of the underlying distribution. It also provides a systematic method and a unified terminology.

Using Gini methodology can reduce the risk of imposing assumptions that are not supported by the data on the model.  With these benefits in mind the text uses the covariance-based approach, though applications to other approaches are mentioned as well.