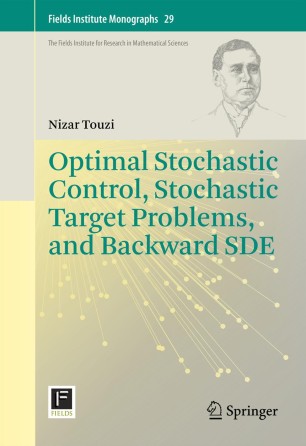 This book collects some recent developments in stochastic control theory with applications to financial mathematics. In the first part of the volume, standard stochastic control problems are addressed from the viewpoint of the recently developed weak dynamic programming principle. A special emphasis is put on regularity issues and, in particular, on the behavior of the value function near the boundary. Then a quick review of the main tools from viscosity solutions allowing one to overcome all regularity problems is provided.

The second part is devoted to the class of stochastic target problems, which extends in a nontrivial way the standard stochastic control problems. Here the theory of viscosity solutions plays a crucial role in the derivation of the dynamic programming equation as the infinitesimal counterpart of the corresponding geometric dynamic programming equation. The various developments of this theory have been stimulated by applications in finance and by relevant connections with geometric flows; namely, the second order extension was motivated by illiquidity modeling, and the controlled loss version was introduced following the problem of quantile hedging.

The third part presents an overview of backward stochastic differential equations and their extensions to the quadratic case. Backward stochastic differential equations are intimately related to the stochastic version of Pontryagin’s maximum principle and can be viewed as a strong version of stochastic target problems in the non-Markov context. The main applications to the hedging problem under market imperfections, the optimal investment problem in the exponential or power expected utility framework, and some recent developments in the context of a Nash equilibrium model for interacting investors, are presented.

The book concludes with a review of the numerical approximation techniques for nonlinear partial differential equations based on monotonic schemes methods in the theory of viscosity solutions.

“This is an excellent book on the topic of Stochastic Control Problems (SCP). The author transformed his notes for a graduate course at the Field Institute into a volume that will serve also as a good reference in the area. … The author has chosen the framework of diffusions, which makes the exposition more friendly and accessible to a larger audience, in particular for those who want to learn this topic.” (Jaime San Martín, Bulletin of the American Mathematical Society, Vol. 54 (2), April, 2017)
Buy options