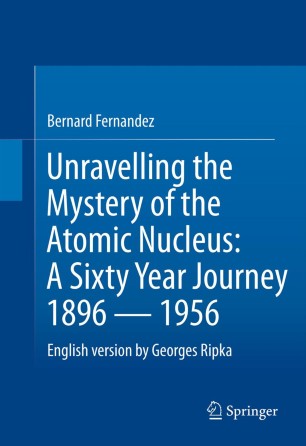 Unravelling the Mystery of the Atomic Nucleus

Unravelling the Mystery of the Atomic Nucleus tells the story of how, in the span of barely sixty years, we made a transition from the belief that matter was composed of indivisible atoms, to the discovery that in the heart of each atom lies a nucleus which is ten thousand times smaller than the atom, which nonetheless carries almost all its mass, and the transformations of which involve energies that could never be reached by chemical reactions. It was not a smooth transition. The nature of nuclei, their properties, the physical laws which govern their behaviour, and the possibility of controlling to some extent their transformations, were discovered in discontinuous steps, following paths which occasionally led to errors which in turn were corrected by further experimental discoveries. The story begins in 1896 when radioactivity was unexpectedly discovered and continues up to the nineteen-sixties. The authors describe the spectacular progress made by physics during that time, which not only revealed a new form of matter, namely nuclei, but also modified our way of thinking by developing quantum mechanics and the theory of relativity.

The book is written in a clear and non mathematical language which makes it both accessible and instructive to laymen, physicists and students, as well as to historians of science. It delves into subjects which are of utmost importance for the understanding of matter in our universe and for understanding how this knowledge was achieved.