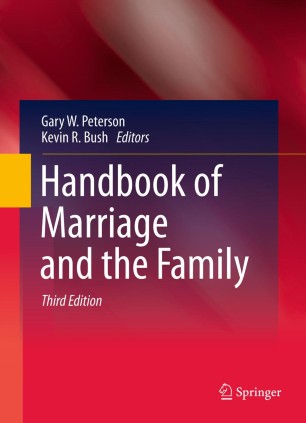 Handbook of Marriage and the Family

Despite waves of societal, cultural, and generational change, the family remains the bedrock unit for studying the individual and society as well as a prime focus of study in its own right. In particular, where diverse family structures were once considered rare occurrences, they are now gaining increased recognition from the social sciences. The Handbook of Marriage and the Family has been updated to reflect the current realities of family life, synthesizing and critiquing the knowledge base in key areas such as dating, parenting, sexuality, gender, ethnicity, sibling relationships, divorce, and stepfamilies. This Third Edition assembles leading experts across the disciplines to cover an expanded range of topics in qualitative and quantitative methodology, roles and relationships, diversity, and application issues, among them:

Like its predecessors, this new edition of the Handbook of Marriage and the Family stands as a comprehensive primary resource for family scientists, sociologists, psychologists, and social workers who work with families, as well as for researchers, graduate students, and faculty in family studies, child development, psychology, sociology, social work, public health, and related fields.

Gary W. Peterson is a Professor and Chair of the Department of Family Studies and Social Work at Miami University, Oxford, Ohio. His areas of research and scholarly expertise are adolescent development within the context of families, parent-child relationships, and family theory. Currently, he is pursuing these areas of inquiry cross-culturally within samples of adolescents from the Peoples’ Republic of China, Russia, India, Kenya, Mexico, Chile, and the U.S. Previous research areas have included public health issues in populations of Mexican-American youth as well as influences on the life plans of low-income, rural youth from Appalachian areas of the U.S. He is a co-editor of the Handbook of Marriage and the Family (2nd Ed.) and Adolescents in Families, Parent-Youth Relations: Cultural And Cross-cultural Perspectives, and Pioneering Paths in the Study of Families: The Lives and Careers of Family Scholars. Dr. Peterson is former editor of the journal Marriage and Family Review and was named a Fellow of the National Council on Family Relations in 2006. Research and scholarly articles have appeared in such publications as Journal of Marriage and the Family, Family Relations, Journal of Adolescent Research, Journal of Research on Adolescence, Youth and Society, Family Process, Sociological Inquiry, and Family Issues. Dr. Peterson is Editor or Co-Editor of books on fatherhood, cross-national parent-child relations, and family theory. He is a chapter contributor to several edited collections on such topics as parental stress, gender in the parent-child relationship, a life course perspective on parent-child relationships, and prevention programs for parent-child/parent-adolescent relationships. Dr. Peterson has been a guest editor for special issues of several research journals and has been a member of the Board of Directors for the National Council on Family Relations.

Kevin R. Bush is an Associate Professor of Family Studies at Miami University in Oxford, Ohio. His research interests focus on child and adolescent development in the contexts of family and culture including academic achievement, self-concept, self-efficacy, as well as internalizing and externalizing issues. He has conducted studies with US (Appalachian, African American, Asian American, European American and Latino) and international (e.g., Chinese, Columbian, Mexican, South Korean, and Russian) samples of children, adolescents and parents. His work has been published in several scholarly journals, including Child Development, Journal of Marriage and Family, Journal of Adolescent Research, Journal of Family Psychology, Sociological Inquiry, Journal of Family Economic Issues, Marriage and Family Review, and Psychology in the Schools. Dr. Bush also has contributed several chapters to edited collections on such topics as adaptation among immigrant families, family influences on childhood development, parenting and adolescents, family relationships and gender roles in Appalachia, as well as gender and the parent-child relationship.