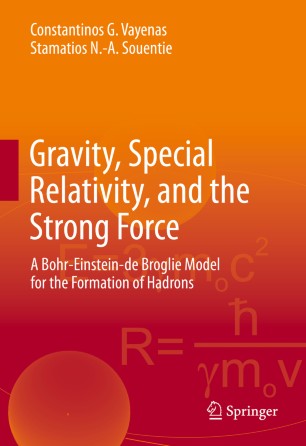 A Bohr-Einstein-de Broglie Model for the Formation of Hadrons

This book shows that the strong interaction forces, which keep hadrons and nuclei together, are relativistic gravitational forces exerted between very small particles in the mass range of neutrinos. First, this book considers the motion of two or three charged particles under the influence of electrostatic and gravitational forces only, which shows that bound states are formed by following the same semi-classical methodology used by Bohr to describe the H atom. This approach is also coupled with Newton’s gravitational law and with Einstein’s special relativity.

The results agree with experiments on the masses, binding energies, radii, angular momenta and magnetic moments of hadrons. The model provides the means to rationalize all the main experimental features of the strong force. Some of the implications for the unification of forces and the nature of our micro-cosmos and macro-cosmos are also discussed. The creation of mass itself, in other words, of hadrons from particles as light as neutrinos, can now be modeled in a straightforward manner.