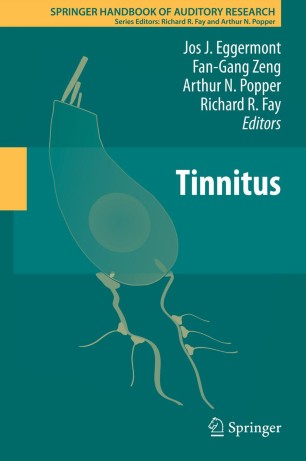 Tinnitus is a prevalent hearing disease in humans, affecting 15% of the population. At present there is no cure for tinnitus, and treatment options are limited.  Recognizing the significance of tinnitus to hearing, as well as it serving as a window into the basic science of understanding of the hearing process, Tinnitus provides a broad overview of the topic.  The volume focuses on neural mechanisms of tinnitus and its behavioral consequences. The book is divided into two parts to address systematically the current issues in tinnitus research

The Cochlea and the Auditory Nerve as a Primary Source of Tinnitus- Régis Nouvian, Michel Eybalin, and Jean-Luc Puel

The Inferior Colliculus: Involvement in Hyperactivity and Tinnitus- Donald Robertson and Wilhelmina Mulders

Stimulating the Auditory System to Treat Tinnitus: From Alleviating the Symptoms to Addressing the Causes - Arnaud J. Noreña