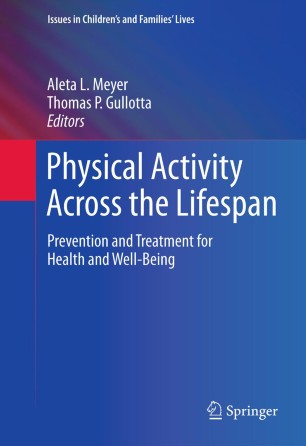 Physical Activity Across the Lifespan

Prevention and Treatment for Health and Well-Being

Part of the Issues in Children's and Families' Lives book series (IICL, volume 12)

The statistics are disturbing: steadily rising numbers of sedentary overweight children and obese teens, and a generation looking at a shorter life expectancy than their parents’. But while it may be obvious that physical fitness benefits both the mind and body, a growing research base is supplying evidence of why this is so, and how these benefits may be reproduced in greater numbers.

Physical Activity Across the Lifespan makes a clear, scientific case for exercise, sports, and an active lifestyle in preventing illness and establishing lifetime health habits at both the individual and the population levels. The book focuses on key aspects of physical/mental well-being—weight, mood, and self-regulation—and the role of physical activity in public health and school-based interventions targeting these areas. Contributors review definitional and measurement issues salient to understanding what physical activity is, to analyzing benefits of participation, and to implementing effective interventions. Also addressed are limitations of current research, steps needed to continue building the field, and emerging therapeutic possibilities for activity, such as the role of rough and tumble play in preventing ADHD.

Included in the coverage:

Physical Activity Across the Lifespan is an innovative text for researchers and practitioners in various disciplines including health promotion/disease prevention, child and school psychology, education, health psychology, and public health, as well as program developers and policymakers in these areas.

Aleta L. Meyer, Ph.D., is President of Prevention Oppoctunities, LLC, and is a senior social science research analyst in the Division of Child and Family Development, in the Office of Planning, Research and Evaluation at the Administration for Children and Families. From 2007-2010, she was a health scientist administrator in the Prevention Research Branch at the National Institute on Drug Abuse (NIDA).  Prior to joining NIDA, she was Associate Professor of Psychology in the Clark-Hill Institute for Positive Youth Development at Virginia Commonwealth University. From 1994-1996, she was a Gimbel Child and Family Scholar. She completed her doctoral work in Human Development and Family Studies at The Pennsylvania State University.  The focus of her research has been to translate theory and empirical research across multiple health outcomes into effective and feasible health promotion and prevention programs for early adolescents.

Thomas P. Gullotta is C.E.O. of Child and Family Agency and a member of the psychology and education departments at Eastern Connecticut State University. His scholarship encompasses co-authorship of two college textbooks, the founding editorship of The Journal of Primary Prevention (Kluwer/Academic 1980 - 2000), co-editor, Advances in Adolescent Development: An Annual Book Series (Sage 1985 - 2000), editor, Prevention in Practice Library: A Monograph Series (Plenum, 1996 - 2001), senior editor, Issues in Childrens' and Families' Lives: A Book Series (Springer 1990 - present). In addition to authoring nearly 100 chapters, papers or reviews, he has co-edited or authored over thirty volumes devoted to illness prevention / promotion of health or the treatment of children, adolescents, and families. Tom was the senior editor for the first edition of the Encyclopedia of Primary Prevention and Health Promotion (Kluwer / Academic, 2003) and has returned to that same role for the anticipated four volume second edition of that reference work (Springer, in progress). His most recent edited volume with Bob Hampton, Handbook of African American Health (Guilford, 2010) was recently recognized by the American Journal of Nursing as the most valuable text of 2010 in the category Community Public Health.

“Educating people about the importance of physical activity, modeling physical activity at a young age to enhance academic performance, and establishing a lifetime of good habits is the goal here. The book is easy to understand and an excellent resource for practitioners (e.g., physical activity professionals, therapists) who may need to educate their constituents that the benefits of physical activity are numerous and can impact quality of life. Summing Up: Highly recommended. Upper-division undergraduates and above; general audiences.” (N. L. Goggin, Choice, Vol. 50 (6), February, 2013)