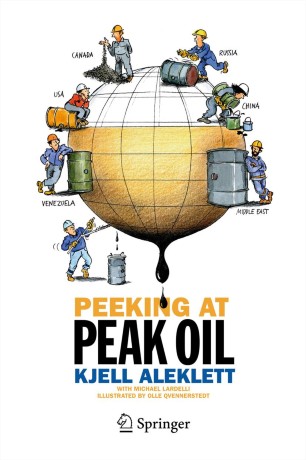 The term “Peak Oil” was born in January 2001 when Colin Campbell formed the Association for the Study of Peak Oil & Gas (ASPO). Now, Peak Oil is used thousands of times a  day by journalists, politicians, industry leaders, economists, scientists and countless others around the globe. Peak Oil is not the end of oil but it tells us the end is in sight. Anyone interested in food production, economic growth, climate change or global security needs to understand this new reality.

In Peeking at Peak Oil Professor Kjell Aleklett, President of ASPO International and head of the world’s leading research group on Peak Oil, describes the decade-long journey of Peak Oil from extremist fringe theory to today’s accepted fact: Global oil production is entering terminal decline. He explains everything you need to know about Peak Oil and its world-changing consequences from an insider’s perspective. In simple steps, Kjell tells us how oil is formed, discovered and produced. He uses science to reveal the errors and deceit of national and international oil authorities, companies and governments  too terrified to admit the truth. He describes his personal involvement in the intrigues of the past decade.

What happens when a handful of giant oil fields containing two thirds of our planet’s oil become depleted? Will major oil consumers such as the EU and US face rationing within a decade? Will oil producing nations conserve their own oil when they realize that no one can export oil to them in the future? Does Peak Oil mean Peak Economic Growth? If you want to know the real story about energy today and what the future has in store, then you need to be Peeking at Peak Oil.

Highlights the major social and economic impacts of the Peak of the Oil Age
Provides an authoritative introduction in easy-to-understand language
Features original illustrations by one of Sweden’s leading graphic artists, Olle Qvennerstedt