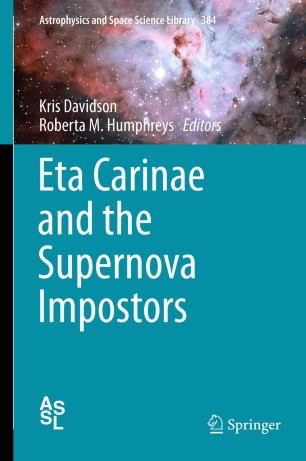 Eta Carinae and the Supernova Impostors

In 1965 Fritz Zwicky proposed a class of supernovae that he called "Type V", described as "excessively faint at maximum." There were only two members, SN1961v and eta Carinae. We now know that eta Carinae was not a true supernova, but if it were observed today in a distant galaxy we would call it a "supernova impostor." 170 years ago it experienced a "great eruption" lasting 20 years, expelling 10 solar masses or more, and survived. Eta Carinae is now acknowledged as the most massive, most luminous star in our region of the Galaxy, and it may be our only accessible example of a very massive star in a pre-supernova state. In this book the editors and contributing authors review its remarkable history, physical state of the star and its ejecta, and its continuing instability. Chapters also include its relation to other massive, unstable stars, the massive star progenitors of supernovae, and the "first" stars in the Universe.