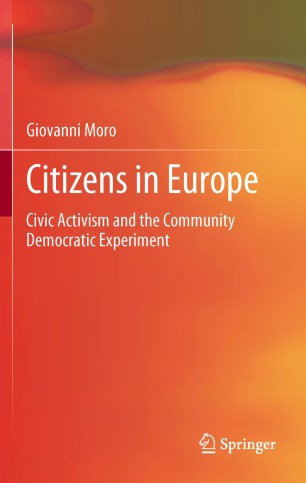 In the Community-building process, citizens are the most invoked and feared, but at the same time the least known subject. This lack of knowledge nourishes the citizens’ detachment from the European Union and itself emerged in well known cases such as the French and Dutch referenda on the Constitutional Treaty or the public concern towards the EU policy on immigration. This gap is true especially for active citizenship organizations operating in the European policy making, not only in Brussels, but also and above all at national and local levels, and this book is aimed at filling this knowledge gap.  The book is divided into two parts.  The first part of the book focuses on the way in which the literature on EU governance and citizenship and on participatory democracy deals with citizen activism in public policy making.  The second part discusses a number of empirical research projects on civic activism in Europe.   This book aims, on the one hand, to bridge the academic debate to more policy oriented debates in which active citizenship organizations and policy makers are involved; and, on the other hand, to bridge theoretical discussion of the nature of the EU with the empirical literature based on the study of civic activism in Europe and at the national level. The distinctiveness of the book is that it tries to overcome both the “methodological nationalism” that affects the research and public debate on the EU, the normative attitude of most part of European studies in favor of an approach aimed at describing phenomena, and the habit of dealing with civic associations in Europe by referring only to the “Brussels Civil Society," making it of interest to both policy makers as well as students and scholars in European Studies, Political Science, Sociology and International Relations. ​