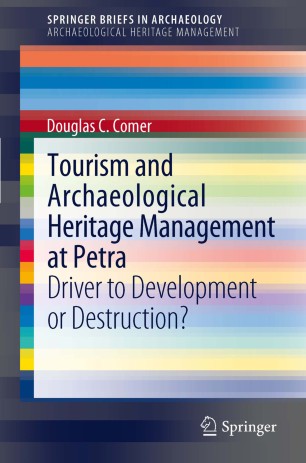 Driver to Development or Destruction?

Part of the SpringerBriefs in Archaeology book series (BRIEFSARCHAE, volume 1)

Once visited only by the cognoscenti of the ancient world, over the last decade Petra has drawn almost a million visitors in some years. Petra burst into popular consciousness with the release of enormously popular motion picture Raiders of the Lost Ark in 1989. Moviegoers all over the world were introduced to some of the spectacular scenic wonders of Petra: the Siq, a narrow chasm with colorful, towering sandstone walls, and Al-Khazna, the exquisitely carved tomb for a Nabataean king.

For centuries, the Nabataeans controlled the trade in precious commodities across the Arabian Peninsula, bring spices from Southeast Asia, incense from present-day Yemen, gold and ivory from Africa, and silk from the Far East across the Empty Quarter to ports on the western Mediterranean.

In 1985, Petra was included on the list of World Heritage Sites. Since then, low cost jet travel and a fast highway from the capital city of Amman have made the site increasingly accessible. The Jordanian government has made attracting tourists to Jordan a top priority.

For all of the attention that Petra has received, it is still surprisingly poorly understood. A widely accepted chronology of the city, even the dates of major tombs and monuments, has yet to be established. Even the mystery of why and how Arab nomads adopted a sedentary lifestyle and built a great city has yet to be fully explained.

Will Petra’s popularity as a tourism destination overshadow the importance of addressing these questions, and, more importantly, will tourism damage the archaeological remains there in ways that make answers more difficult or even impossible to find?

Douglas Comer has conducted archaeological heritage management projects around the world as Principal of Cultural Site Research and Management. He is Co-President of ICAHM. Dr. Comer is a specialist in the use of aerial and satellite images and GIS in archaeological research and resource management.

A former Fulbright scholar in Thailand in cultural resource management, he is the author of Ritual Ground: Bent's Old Fort, World Formation, and the Annexation of the Southwest (University of California Press, 1996), as well as many articles dealing with archaeological heritage management and remote sensing technologies.

Although the authors focus on the negative impacts of tourism, they do so in the spirit of finding better ways to operate, as the situation is clearly urgent. In his conclusion, Douglas Comer uses the apt metaphor of a juggernaut that is out of control and destructive to summarize the frictions between preservation and profit based on mass tourism at Petra. Drawing on the threads laid out by each of the authors, Comer asks, what is the way forward? He focuses on the essential role of site management and calls on the World Heritage Committee to reform its procedures to restore the purpose of the World Heritage Convention and place a higher priority on preservation than on tourism.