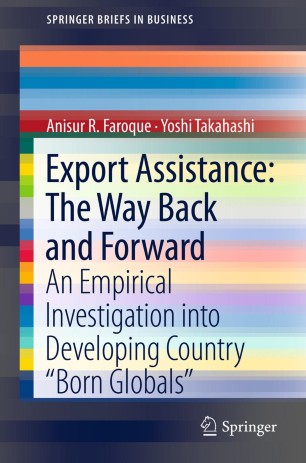 Export Assistance: The Way Back and Forward

Part of the SpringerBriefs in Business book series (BRIEFSBUSINESS)

“Born global” (BG) firms have attracted many researchers throughout the last decade. The emergence of this phenomenon initially posed a serious challenge to the validity and applicability of the traditional “stage” theory of internationalization; however, scholars have more recently been able to reconcile traditional and new theories into a single framework for studying the process of internationalization.  This volume applies both network theory and knowledge-based theory to analyze export assistance in the context of internationalization of low-tech BG firms in developing countries (with an in-depth study of the apparel industry in Bangladesh).

The findings that non-governmental network partners provide more useful advice than government agencies is one that may resonate through other countries, including developed economies.  Government’s more useful role is confined to the financial support and incentives that are provided to such firms.  It is, however, the commitment to exporting that emerges as critical for performance, more so than export strategy, suggesting that enhanced export performance is to attract, reassure and motivate entrepreneurs in ways that strengthen their commitment to international expansion.