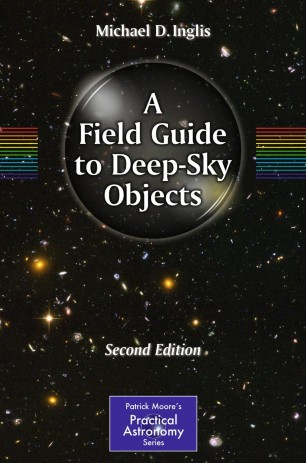 A Field Guide to Deep-Sky Objects

This popular title is now back, bigger and better than before!

In this companion guide to stars, star systems, galaxies, and other deep sky sights you can choose a class of object and set up an annual program for yourself that will take you from month to month, helping you locate famous targets or, if you prefer, hunting down the lesser known but still dazzling sky sights. Detailed descriptive summaries of each class of object are followed by extensive lists of deep-sky targets, presented in a monthly format and going from those objects easy to locate to those that are more of a challenge. Amateur astronomers of all levels will find this book invaluable for its broad-ranging background material, for its comprehensive lists of fascinating objects, and for its power to improve your observing skills.

Michael Inglis is a professional astronomer with a Ph.D. in Astrophysics from the University of Hertfordshire, UK. He has worked at the University of Hertfordshire, Warwick University (UK), Princeton University (United States), and currently is an Associate Professor of Astronomy for the Earth & Space Science Department at Suffolk County Community College (part of the State University of New York, SUNY). He has done research in nebulae morphology, active galactic nuclei, and cosmic rays and has authored several refereed papers. He has also had many popular articles published in the magazines Sky & Telescope and Astronomy Now had written several books for Springer, including An Observer's Guide to Stellar Evolution, (2002); Astronomy of the Milky Way, Vol I & II (2004); Astrophysics is Easy (2007). He currently serves as the series editor of the Springer Astronomer's Observing Guides.