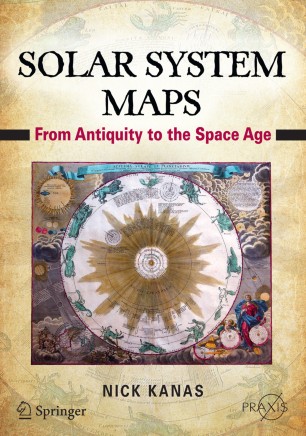 From Antiquity to the Space Age

In recent years, there has been increased interest in our Solar System. This has been prompted by the launching of giant orbiting telescopes and space probes, the discovery of new planetary moons and heavenly bodies that orbit the Sun, and the demotion of Pluto as a planet. In one generation, our place in the heavens has been challenged, but this is not unusual. Throughout history, there have been a number of such world views. Initially, Earth was seen as the center of the universe and surrounded by orbiting planets and stars. Then the Sun became the center of the cosmos. Finally, there was no center, just a vast array of galaxies with individual stars, some with their own retinue of planets. This allowed our Solar System to be differentiated from deep-sky objects, but it didn’t lose its mystery as more and more remarkable bodies were discovered within its boundaries.

This book tells the exciting story of how we have conceptualized and mapped our Solar System from antiquity to modern times. In addition to the complete text, this story is made more vivid by:

• 162 Solar System and planetary maps, diagrams, and images (over a third in color);

• direct quotes and figures from antiquarian, contemporary, and Space Age documents and photographs that allow the reader to track how humans have viewed the Solar System from original sources;

• nine tables that compare the various world views, relative planetary positions, and components of the Solar System with each other.

Broad in scope and rich in imagery, this book will draw the reader into the story of our Solar System and how it has been mapped since the beginning of recorded time.